The end of one tremendous journey, and the beginning of another. ISAB’s core technical development team met on Thursday 23 November to finesse the final touches of PreciseInhale® before handing it over for large-scale production to AQ M-Tech AB. 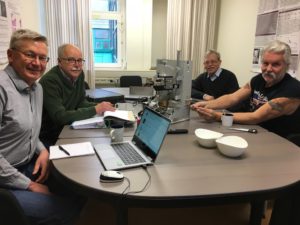 ey are the core team of software, construction and medtech engineers who from the beginning have helped PreciseInhale® inventor and ISAB CSO Per Gerde build his equipment and realize his vision. And now they have met to oversee final tweaks and flourishes to the system before it is handed over to manufacturers AQ M-Tech in Uppsala Sweden for scale-up.

Janne Annerstedt, technology and development engineer at Fillauer Mekaniska, Lars Gille, construction engineer and software engineer Carl-Olof Sjöberg have been responsible for constructing and refining PreciseInhale® as it is today, and as it has been installed already in eight client labs and institutions.

Inhalation Sciences (ISAB) contracted AQ M-Tech AB for the upscaling of production of PreciseInhale® in October 2017. It is an important step in ISAB’s commercialization process, creating good conditions for ISAB to meet increased demand for its products.